Description:
This is a rare set of 4 of a complete set of 6 17th century Gaston Ignace Pardies*** (1636-1673) Celestial Maps. The folios were colored contemporaneously and are in over all excellent condition, the colors remain clear and crisp with only very minor degradation.The maps are beautifully framed and matted.
Please contact me using the link at lower left for additional information, photos and trade/retail pricing. Thanks for visiting--all inquiries are welcome.
****************** THESE MAPS HAVE BEEN SOLD *******************

***Pardies was born in Pau, the son of an advisor at the local assembly. He entered the Society of Jesus on 17 November 1652 and for a time taught classical literature; during this period he composed a number of short Latin works, in prose and verse. After his ordination he taught philosophy and mathematics at the Lycée Louis-le-Grand in Paris. His earliest scientific work is the Horologium Thaumanticum Duplex (Paris, 1662), in which is described an instrument he had invented for constructing various kinds of sundials. Three years later appeared his Dissertatio de Motu et Natura Cometarum, published separately in Latin and in French (Bordeaux, 1665). His La Statique (Paris, 1673) argued that Galileo's theory was not exact. This, along with Discours du mouvement local (Paris, 1670), and the manuscript Traité complet d'Optique, in which he followed the undulatory theory of light (which identifies it as a harmonic vibration), form part of a general work on physics which he had planned. Traité complet d'Optique had been studied by Pierre Ango (1640-1694) a confrere of Pardies for his Book L`Optique[2] which he published in 1682 after Pardies early death. The Manuscript has also been mentioned by Christiaan Huygens in his 'Treatise on Light'. Huygens himself mentioned in 1668 that it has been Pardies Theory that the speed of light is finite.[3]

He opposed Isaac Newton's theory of refraction and his letters together with Newton's replies (which so satisfied Pardies that he withdrew his objections) are found in the Philosophical Transactions of the Royal Society for 1672 and 1673. A proponent of Mechanism, his Discours de la Connaissance des Bestes (Paris, 1672) combatted Descartes's views on animals, but did so so weakly that many looked on it as a covert defence rather than a refutation, an impression which Pardies himself afterwards endeavoured to destroy. His Elémens de Géométrie (Paris, 1671) was translated into Latin and English. He left in manuscript a work entitled Art de la Guerre and a celestial atlas comprising six charts, published after his death (Paris, 1673–74). His collected mathematical and physical works were published in French (The Hague, 1691) and in Latin (Amsterdam, 1694). He was a member of the academy of anatomist Pierre Michon Bourdelot. 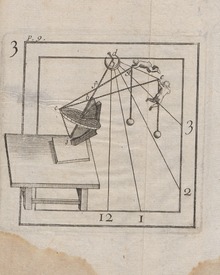 In 1674, Pardies published the star atlas Globi coelestis in tabulas planas redacti descriptio in Paris. The atlas was partially based on the work of another French Jesuit scientist Thomas Gouye.[4] The atlas was engraved by G. Vallet and dedicated to Johan Friedrich, Duke of Braunschweig-Luneburg. The constellation figures are drawn from Uranometria, but they were carefully reworked and adapted to a broader view of the sky.[4] In 1693, a newer edition was published and in 1700 another edition appeared. They include new information, such as the paths of comets observed since 1674. The atlas uses gnomonic projection so that the plates make up a cube of the universe. The atlas served as a model for the star charts of William Rutter Dawes published in 1844.[5]